A name to remember 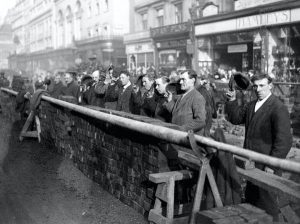 ‘The first stroke of eleven produced a magical effect. The tram cars glided into stillness, motors ceased to cough and fume, and stopped dead, and the mighty-limbed dray horses hunched back upon their loads and stopped also, seeming to do it of their own volition.

‘Someone took off his hat, and with a nervous hesitancy the rest of the men bowed their heads also. Here and there an old soldier could be detected slipping unconsciously into the posture of ‘attention’. An elderly woman, not far away, wiped her eyes, and the man beside her looked white and stern. Everyone stood very still… The hush deepened. It had spread over the whole city and become so pronounced as to impress one with a sense of audibility. It was a silence which was almost pain… And the spirit of memory brooded over it all.’

Those words of a newspaper journalist from the Manchester Guardian captured the mood on 11th November 1919 when the people of London took part in the first act of remembrance one year after the end of World War 1.

An act of silence has become a regular part of other occasions where commemoration and memories are called for and often accompanied by the reading of names of those who died.

Names have a very importance place, don’t they? Names help us to remember people. Our own name is part of our identity. Our name helps distinguish us from another person. Names speak of people in different ways. In life and in death, names mean different things to different people.

A name can stimulate all sorts of pictures and recollections of who someone was or is and what they meant or still mean to us. The mention of a name provokes memories, recognition and a range of responses. We can shed tears or get excited when we hear a name. The mention of a name can make us run towards someone – or in totally the opposite direction.

In the Anglican Confirmation service, other words from Isaiah are said by the bishop as their hands are placed on the candidate’s head: ‘God has called you by name and made you his own.’ (43.1)

God is with us in our battles. Where the equivalent of going over the top is waking each morning, dreading the day to come. Where flying a sortie is like the stress and strain of dealing with work demands or the threat of redundancy. Where going on patrol is the same as the coping with the demands of caring for someone who drains our innermost being.

For some, life is constant battle. Some live in a total state of anger and bitterness about other people and past events: always fighting others, never finding peace.

The endurance of our faith means that no matter how much we suffer here on earth, by remaining faithful to God a place in heaven is secure, the promise of eternal life undiminished. With God, yours is always a name to remember.