There once was a man who had two sons. The elder one was in line to take over the family business. The younger, disillusioned with his lot, went off to a distant land.

Sibling rivalry is nothing new, of course. Neither is parental estrangement or the presence of family conflicts. When thinking about the latest set of painful events to afflict the royal family, I am sure I’m not the only one to be reminded of the parable of prodigal son.

As one who experienced sudden and unexpected maternal loss in my early life, I have some sympathy with the range of resultant emotions and behaviours; the impact of acclimatising to stepfamily dynamics; and the desire for others to hear my story when I didn’t always take time to hear theirs.

Prince Harry’s story is, like many others, a very sad one. The years of anger and grief have exploded in to the public domain. One hopes it is not as long before he ‘returns’ to his father and brother – and sees if he is welcomed back – before the time for reconciliation has been lost.

My own father had a brother and sister who had become estranged from each other. One of the best things my sister and I ever did was to bring the three of them together for the first time in well over 30 years. It was just the once. Within a year, both my father and his sister were dead. But their time for reconciliation had not been lost.

In the same way that I have reflected on the parable in a previous post (coincidentally, one which also reflects on my relationship with my own father) I have been drawn again recently to the writings of Henri Nouwen. 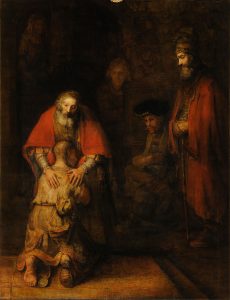 In his seminal book of the same name, Nouwen reflects on Rembrandt’s painting of The Return of the Prodigal Son, writing: ‘It was so easy to identify with the two sons… But what of the father? Why pay so much attention to the sons… when it is the father with whom I am to identify? Why talk  so much about being like the sons when the real question is “Are you interested in being like the father?”

My two new books, Finding Stability in Times of Change and debut novel, Looking to Move On are available in paperback online or from me and also an eBook. More details at richardfrostauthor.com