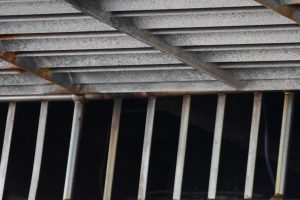 The Vicarage had never heard anything quite like it: the three most prominent swear words in the English language all in the same sentence (and none of them began with B or S).

The lorry driver was clearly having a bad day – and it wasn’t even half past eight. A fortnight of roadworks was coming to an end when his outburst disturbed both the serenity of village life and that of his colleague at whom it was directed. A slammed cab door completed the tirade – well, almost, he then threw something and went on for a bit longer.

We live in a world of instantaneous rage. While the benefits of email and social media generally outweigh the disadvantages, the ability to vent one’s spleen without warning and with immediate effect is one of technology’s less attractive attributes. And probably most of us have fallen victim to it – if not been perpetrator also.

Many of the difficulties that arise in workplaces, such as that in our street last week, are a result of conflict. Situations which could have been so easily sorted out at a much earlier stage. Same is true in churches, sadly, whether it’s an intra-parish argument that has lasted for decades (literally in some cases) or the serial complainers who always want things done in the way the previous vicar did it.

A role model for me was my former manager, Christine, who I’ve written about before. You always knew where you stood with Christine. If something was wrong, everyone knew about it… but once it was talked through and resolved, that was it. We moved on.

It was also the case that she sought to understand what else was going on for people. I have no doubt that the incident with the lorry driver was potentially nothing to do with what his colleague had got wrong. What was going on behind the scenes? Maybe it was trouble at home or he‘s struggling with cost of living or a dying relative…? There is often a reason behind such outbursts – and they need a listening ear more than the swear words which arrive at full speed.

Coping with conflict is embedded in us in different ways. We may have learnt our own way from other people or how we respond to criticism or even from the television (look at some of today’s dramas and it’s no wonder there’s been a rise in knife crime and the use of the f-word…).

We learn to ‘take sides’ at a very early age. We stick by people against others. We champion particular causes. We manipulate other people to agree with our point of view – even when we are in the wrong. Such approaches, while often natural and normal, can also create tension and conflict.

We might be someone who avoids conflict or who, in an odd sort of way, seems to thrive on it. Then there are those who take a deep breath, step away and respond in a more measured manner later on. There are times when we can make a choice about how to react.

Even when the effort and perhaps the anxiety or fear of talking with and listening to those concerned is too daunting, conflicts which are left unaddressed will only get worse and become more entrenched.

Both Jesus in his teaching and the guidance given in the Rule of St Benedict can be helpful in coping with conflict. Aspects of the modern day legal system and the principle of mediation find their roots in Jesus’ teaching (see Matthew 18:15-20). Jesus encourages us to deal with disputes as individuals and, if unresolved, then calling witnesses or mediators, and, if still unresolved, coming before the relevant community in order to try and reach a solution. Sadly, many conflicts never even reach the first stage.

Of the many themes that run through the Rule, the resolution of conflict is particularly important – and listening to others is fundamental to it. David Foster, a Benedictine monk wrote: ‘There is no question here of who is in the right or of what might have prompted the behaviour that has caused the upset. The precept is about taking the initiative in making a different future possible.’

Coping with conflict is of course closely linked with forgiveness – click this link to listen to a talk about Exploring Forgiveness.