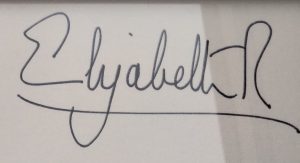 The last few days have given rise to thoughts, memories and emotions in almost everyone. In particular, many have spoken about the servant Queen. One who had been equipped to serve. One who served her country, it seems to me, right to the end.

My sense is that, like many people at such an age and stage, the Queen knew that death was not far away. And I wonder if, like others sometimes do, she ‘hung on’ for one final act: inviting her fifteenth and last Prime Minister to form her government. Having done that, that one final act of service and duty, she knew she could now move on.

Service. The word is one that sits with many meanings and in many settings (indeed, the Collins English Dictionary lists no less than 17 nouns and several verbs in its definition). At the other end of society’s hierarchy, we think of people ‘in service’. Those who lived ‘downstairs’ while the high and mighty lived high and mightily ‘upstairs’. In recent decades we’ve increasingly heard businesses and organisations boast about their level of ‘customer service’: whether it’s how staff answer the phone right through to encouraging customers to leave five-star reviews. A recent example for us was when we last visited the lovely town of Malvern. For the first time (and the last) we rented an apartment from a well-known service (there’s that word again) that lets owners, known as hosts, rent out their own properties for people to stay in. It was, as in the post I wrote at the time, a near disaster. But what struck us afterwards was when we received the ubiquitous ‘satisfaction survey’. For it was left to the host to decide whether or not to publish it. Needless to say, our responses did not pass that aspect of customer service quality control.

And, for me, there’s the rub. So often it seems that ‘customer service’ has become a synonym for simply making the organisation look good and not always about the service they actually give to those who are their customers.

On another tack, last Saturday, in Exeter Cathedral, 15 people were ordained to be members of the clergy in the Church of England. Within the service (there it is again) those being ordained not only heard what is required of them but they promised to do it… Will you be a faithful servant… Will you work with your fellow servants… ‘By the help of God, I will,’ they responded. There will be many times when they will not deliver a five-star service and there will be plenty of people who will give them a bad review… but with the help of God, they will do what they can, and there will be many who will appreciate their efforts also.

I’ve reflected on the topic of service before. But what does it mean to serve? To serve other people? To serve God? In what ways are we to be servants?

Many biblical examples come to mind. There’s Martha and Mary, two very different examples of service and Jesus himself speaks on several occasions about serving others.

Like in the dictionary, though, all of us will have many different definitions of how we have served others at times. Service which perhaps didn’t even receive acknowledgment let alone five stars or maybe other occasions when we did know what it meant to someone else. Many will have served us also, with and without our acknowledgement.

Paul writes, ‘Do nothing from selfish ambition or conceit, but in humility regard others as better than yourselves.  Let each of you look not to your own interests, but to the interests of others. Let the same mind be in you that was in Christ Jesus.’ (Philippians 2:3-5)

And a prayer based on words of Augustine of Hippo:

Two new books: Finding Stability in Times of Change and a debut novel, Looking to Move On will be published soon. Details of both books and launch events are available at richardfrostauthor.com