Six years ago I bought a FitBit. A little one that clips on to a pocket. I was finally emerging from a second episode of M.E./Chronic Fatigue. Strangely, that period had been longer (7 years) but less serious than the first time some 20 years previously when it was worse but shorter (3 years).

I wanted to be able to measure my progress in some way and having been failed dismally by several of those cheap pedometers one can get, this purchase seemed to be more reliable.

Back then, I could manage around just 3,000 steps a day. Now it’s an average of 8,200 a day. Much progress has been made and occasionally, especially when Jane and I have been on holiday or taken Daisy the Vicarage Dog for a longer outing, I’ve got in to five figures. (All the same, there are still times when the philosophy becomes ‘I think therefore I can’t.’)

In the work I used to do I learnt about the importance of helping people measure progress. I often used the example of how when looking after ourselves it can be helpful to try and think of it as being like the Stock Exchange – it goes up and down but the general trend is always up. (The reverse being a significant cause for concern, of course – I’m talking mentally or physically here not monetarily…)

Many people have a tendency only to think about the problems they face and be left feeling they haven’t progressed very much at all. Having ‘touch points’ to reflect on can be helpful in noticing our progress. Thinking back to the last time a similar event happened (whether it was simple or complex) or to recognise those occasions when ‘I couldn’t have done that a while ago…’

Progress can be and is often best measured in very small steps.

One of Jane’s favourite sayings is ‘Only til break.’ The ex-teacher in her using a reminder of how the most demanding times can be like school days. Going from lesson to lesson with breaks in between.

Bit like life generally, really. (Although some may feel they never get a break…) 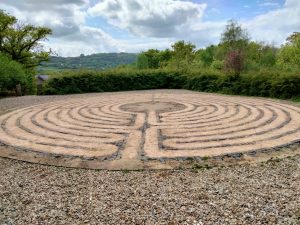 Having spent the last week on retreat at Sheldon I was reminded about how taking steps is an integral part of life and faith. Whenever I go there, I walk the labyrinth at least once every day, most days twice. My trusty FitBit tells me it’s 500 steps to the middle and another 500 back.

Entering the Sheldon labyrinth takes one almost straight away to the centre – but not quite. It’s tantalisingly close. One could step in to the middle, of course, but that is not the point. The point is to walk the whole thing.

And so it is that the path then goes out to the far edges and then in and out of the circle. Coming closer to the middle and then going away again. Each step providing a focus for thoughts and reflections.

Eventually, one arrives at the centre. The place where the labyrinth journey reaches its destination.

Unlike a maze, where it is the decisions one makes that determines whether we reach the centre or get lost in the process (a better measure of life, it seems to me), a labyrinth only requires one choice – to make the journey, safe in the knowledge that the path will reach the destination.

Walking the labyrinth is only possible because we take one step at a time and follow the path. To go through the ups and downs. The ins and outs. The feeling close and the being far away. And within that seeing ourselves make progress.

The centre symbolises the full encounter with God… and oh, how much longer we would like to remain there.

But no, the journey also means going out once again. Taking that which we encountered back in to the world in which live.