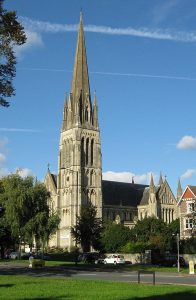 Many years ago, I lived in a flat at the top of the Vicarage of a large church in Bristol. In those five years I saw and experienced first-hand the 24 hour a day demands, intrusions and joys of such a place.

From sharing Christmas lunch with the vicar and his family (during which their cocker spaniel ate the remains of the turkey) to making cheese sandwiches for Jack, the local, ex-merchant navy tramp who was a regular visitor day and night. From being ‘held hostage’ one Sunday afternoon by a couple and their young child demanding I found them somewhere to live to  answering the ever-ringing phone.

That experience instilled within me a lifelong concern for the clergy and an awareness of the pressures and the lack of support and understanding of their role that exists at both congregational and broader levels within the church nationally (the same will be true of other denominations, I’m sure).

It’s a concern that has stayed with me for the 35 years since. And then I actually became a clergy spouse when my wife was ordained in 2015. And not only that but our daughter is now training for the ministry!

As I found to be the case in my employment career, God often uses our experiences as part of the bigger picture of our lives.

I’ve written elsewhere about the church being behind the times and while the same is true in this case, it is good that the CofE is addressing the issue of clergy wellbeing. Work that started back in 2015 is now being discussed by local parish church councils. But this is a complex issue and in my experience it’s unlikely that such councils will know how to respond in ways that are truly informed and meaningful.

As also written about elsewhere, the Society of Mary and Martha (colloquially referred to by its location of Sheldon) has been pastoring the pastors for the same length of time since I left my Bristol home. A place of retreat, support and guaranteed anonymity, they have been ahead of the times in the provision of the online Sheldon Hub as a place of further consolation and advice.

The core issue for me, as I have observed and lived with clergy life, is that most people do realise the role of the clergy is not just about Sundays. Indeed, the reality is that that day and the preparation for it (in terms of time) is a relatively small part of the role. But I would be fairly certain in saying that the majority of people have no idea at all what fills the rest of the week. Drawing a topical, if somewhat imperfect, comparison, the working life of a footballer is not just about 90 minutes on the pitch – although there is many a penalty shoot-out…

For many clergy, particularly those working in parishes, it’s on call all day, every day, six days a week (seven if they don’t choose well…). Being anything from a social worker to a business manager, much of it without the relevant training. Being asked to look after themselves while being asked to do more (not least in this pandemic).

A fairly simple and straightforward action that any of us can undertake would be to at least increase the understanding of all that clergy are required to do. And the fact that each one has all the other ordinary (and not so ordinary) family and life commitments as well.

Like its Sheldon namesake, the story of Mary and Martha is helpful. To be like Jesus with Mary, to sit with, listen and understand; and with Martha, to encourage, affirm and support. There are those who do that, for which we can be enormously grateful, but all of us, including me, can do more.

A couple of days after this post was published, we received a welcome Wellbeing Pack from the Diocese of Exeter: good to know they are taking clergy wellbeing seriously.

Into the valley of Death    Rode the six hundred. It seems somewhat foolish to being calling it ‘Freedom Day’. With a third Covid wave charging onward, Tennyson’s famous lines have for me found a Read more…

Daisy the Vicarage Dog is great with people. The six-year-old cocker spaniel can often be seen around the villages with the local vicar. She loves pastoral visiting and is greatly admired in return (Daisy that Read more…

Last year was a year like no other – and the next 12 months may not be that different! Lest you think that to be a ‘Unhappy New Year’ greeting, please read on… In the Read more…