Published by Richard Frost on 15 August 2021

‘I thought you’d have opened up by now,’ the voice said as I unlocked the church door for a Quiet Morning. ‘I’m going to the office.’

‘The office isn’t open to the public at the moment,’ I explained.

To be frank, no I didn’t. But I left it at that. It was when I overheard them talking to the local vicar about their significant health issues that, as is so often the situation, I understood their words. Another case of someone losing sight of who they are perhaps.

The tragic events in Plymouth (a town which was home for me when I was a child and many happy times visiting my grandparents in Keyham thereafter) have shown once again what can happen behind locked doors. But more than that, they will have left many struggling to come to terms with what has taken place and who they are within it.

In stark contrast, the Olympics brought stories of those who have opened the door to tell others about what they endure. The lack of family being there to watch them. The need to focus on mental wellbeing. A coming to terms with who they are.

The Quiet Morning took them theme of ‘Holidays, Holy Days’. A time to reflect on the current season. A time to revisit who we are.

I thought it a good excuse to show my holiday snaps but alas that was not permitted… but I did sneak one in.

A few weeks ago, Jane and I spent time in North Yorkshire and during it we went not once but twice to Ripon, one of the smaller cathedral cities in the UK. We joined a handful of people in the Cathedral’s midday communion service and sat there I became transfixed on this painting which hung on the wall across from where I was.

It’s a painting by Robert Thorburn of Mary Magdalene stood at the foot of the Cross. 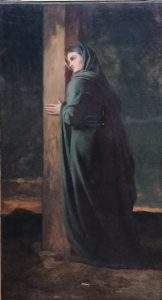 Much has been done in recent years to restore the image of Mary and recognise just what an important figure she was in the life of Christ (you can read more about her here and in these other posts). Along with other women, she accompanied Jesus and the central group of male disciples and is arguably one of the most important figures in Jesus’ time on earth.

And here Mary stands at the foot of the Cross. The painting asks us several questions. What is she thinking? What is she feeling?  In the background is the sun: is it the setting sun of Good Friday after the crucifixion or the sun rising on Easter morning before she makes her way to the tomb? Is she holding on to the cross out of insecurity in her grief or in the security of the knowledge that Christ is the son of God?

Mary Magdalene knew who she was. And in that famous encounter with the risen Jesus, she heard her name being called, confirming all that she was.

I’ve written elsewhere about using images for prayer and reflection. You may like to imagine yourself holding on to the cross – and perhaps being held by it.