“I don’t want to get to retirement and think, ‘Was that it?’”

Well, that was 20 years ago. Today, I got to retirement. That was it. And that was good. So good.

For most of the intervening 20 years, I’ve worked with the most wonderful team of colleagues. Caring, supportive and one with a common purpose. A team with a default answer of ‘yes’ – or at least, ‘let’s think about it’. Rather than the demoralising ‘No, we can’t do that’ attitude common in so many workforces. It’s a team which values each other for who they are, not just what they do. I know I have been very fortunate. It has been a privilege and an honour.

For many people, the only reason they know they’re doing a good job are the times when they’re not being criticised. Not that I’ve never been criticised. Far from it. I’ve upset people. I’ve trampled over some. I’ve poached staff from others. I’ve worked with difficult people. I’ve made mistakes. I’ve been bullied, shouted at and disrespected. Everything that happens to everybody at some point or other. That’s working life. 41 years of it.

Yet many people are never thanked for the work they do or honoured for who they are. For me, though, these last few months have been humbling – and somewhat overwhelming. Nominated for a NHS 70th Anniversary Parliamentary Award (which I didn’t get) and a Lifetime Achievement Award from my employer (which I did). And then there was: ‘Urgent – On Her Majesty’s Service’. A letter from the Palace. Six weeks of silence. Nobody could know. When they did, the congratulations were overwhelming. 153 emails. 21 cards. A real honour and deeply humbling. All too much, though. I’ve only been doing my job. 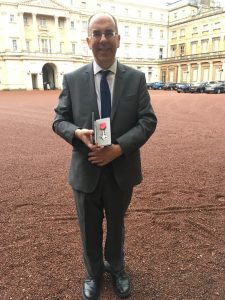 Buckingham Palace last Friday and farewell lunch today. And it all happened again. Cards, congratulations and compliments. Both amazing days. Quite surreal at times. Asked by Prince William if I (me!) thought he (him!) was making progress in supporting employers regarding mental health. The farewell lunch gathered together over 50 people who have supported and taught me so much over the years. Another honour and privilege.

A generous farewell gift pays for a specially commissioned icon to be written (the technical term for icon painting) by Brother Michael OSB, Benedictine monk at Mucknell Abbey. It will be based on the famous 15th century icon by Andrei Rublev. The Trinity.

The icon depicts, from left to right, God the Father, God the Son and God the Holy Spirit. The embodiment of Love. Seated around a table. At the front, an empty place. A place of honour and privilege – and not just for the honoured and privileged. A place at which anyone can sit.

Working or retired. Happy at work or not. Employed or unemployed. Parent at home, student or volunteer. Well or unwell. Feeling loved or unloved. Of faith or no faith. Whatever your situation. The place awaits you.

A place of honour and privilege.

A place to which you are invited.

Invited by Love to be honoured for who you are.

Love bade me welcome. Yet my soul drew back
Guilty of dust and sin.
But quick-eyed Love, observing me grow slack
From my first entrance in,
Drew nearer to me, sweetly questioning,
If I lacked any thing.

A guest, I answered, worthy to be here:
Love said, You shall be he.
I the unkind, ungrateful? Ah my dear,
I cannot look on thee.
Love took my hand, and smiling did reply,
Who made the eyes but I?

Truth Lord, but I have marred them: let my shame
Go where it doth deserve.
And know you not, says Love, who bore the blame?
My dear, then I will serve.
You must sit down, says Love, and taste my meat:
So I did sit and eat.