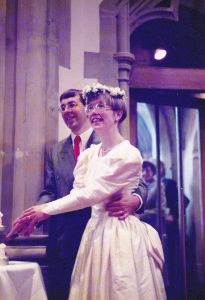 The bride gave a speech. The two best men sang. The groom ate a marmalade sandwich during the signing of the registers and the 300-strong congregation ate cake and drank wine in church.

It was the wedding of the year. At least it was from our perspective. Thirty years ago, Jane and I were married on a cold winter’s day, the previous week’s heavy snow (a rarity in Devon) having only just moved on in time. It was the first wedding in a newly refurbished church after a devastating fire a few months previously. It was a different sort of wedding day – partly because I was and had been quite unwell for the previous 18 months but mainly because we wanted it that way. We’ve often done things a bit differently from what other people expect…

In the years since then, we have had two wonderful children and many happy times. Jane has moved on from teacher and pastor of school children to teacher and pastor within a Church of England Team Ministry. I from a fulfilling career to a rewarding next stage of life (via Buckingham Palace). There have also been many difficult times. The loss of three of our parents in the space of 12 months and a misjudged house move to the other side of the country, to name just two. Many other events have enabled us to love and to cherish, and taken us through sickness and health, for better and for worse, for richer and for poorer.

Throughout all the years, our constant by-words have been communication and gentleness.

We have ‘failed’ in both on many occasions but they remain firm handles to hold on to when the storm is strong.

Back on Saturday 16 February 1991, we were two ordinary people (in, yes, a perhaps slightly extraordinary setting) making a lifetime commitment in the same way many millions of others had done so before and since.

We, like you reading this, like many others, are all ordinary people who encounter an extraordinary God. When Jane was ordained in 2015, she told the somewhat smaller gathering who met afterwards: ‘There are three people in our marriage: and the third person is God.’ Words that echoed those of St Augustine perhaps: ‘love means someone loving and something loved with love. There you are with three, the lover, what is being loved, and love.’

A God who is faithful and strong. A God who steadies the boat when the storm is strong. A God of the ordinary and a God of the extraordinary. A God of love – a love which is at times is very different from what other people expect or experience. The love that the disciple John knew all to well.

Recently, we have both been struck by some words of another great Saint, Teresa of Avila which provide another set of handles to hold to:

Think little, love much, do whatever awakens love.

Thank you for reading this post. Due to the amount of spam being received the comment facility on this site has been removed. If you would like to comment or offer your thoughts or experiences then please go to the new Work Rest Pray Facebook group.

Click here if you would like to have some material to reflect on during Lent &/or do join Jane and I for a Lent Course based on A Story to Tell.

The last few days have given rise to thoughts, memories and emotions in almost everyone. In particular, many have spoken about the servant Queen. One who had been equipped to serve. One who served her Read more…