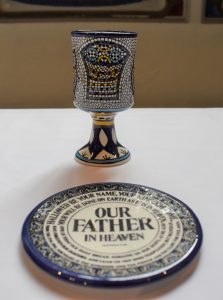 The local vicar is on a short sabbatical this month. Well-deserved and well-needed. A very generous gift from the Church of England after she carried our six churches through the pandemic and a year-long wait for a new full-time colleague all at the same time.

One of the nice things about such a period as this is that Jane and I can sit together in church: a rarity nowadays. Another is that we can go to services in other places. At one such, the retired minister taking holy communion was someone we knew a long time ago – indeed, he is the father of two of our bridesmaids.

One of the many difficult things about the last two years has been not receiving wine at communion (because of the shared cup used in the Anglican tradition). Although, in the eyes of the Church of England, receiving communion in ‘one kind’ (in other words, the bread only) is deemed to be full communion, personally, it doesn’t seem like that to me, I’m afraid (but I’ve always been a bit off the main track).

Also called the Eucharist or Mass (and other titles), holy communion is an important act in the lives of Christians. It’s something which is done to remember what Christ did at the Last Supper in a very simple way… that we have made, oh, so complicated.

Sometimes, the emphasis on the act of celebrating the Eucharist verges on worshipping the act itself, rather than what it means for each one of us. On the other hand, communion is sometimes celebrated in a way which is so lacking in reverence that it too loses its meaning. (I can feel some people shunting me off to a siding…)

One of the other implications of Covid was that ministers giving out the bread could not say anything to the person receiving it because of the risk of aerial transmission. As those restrictions are cautiously relaxed, it was very special when in giving me the bread (yes, actual bread – another plus point in my book) our minister-friend said the words, ‘The body of Christ given for you.’

Not only that, but then he added, ‘Richard.’ That hasn’t happened for years. The body of Christ given for me, by name.

When Jesus sat in the upper room of a house just outside Jerusalem on the evening before his trial and crucifixion, he was surrounded by those who loved him most. The central group of twelve disciples (yes, including Judas, who was to betray him) and, I’m sure, some of the women who followed him – women such as Mary Magdalene and Mary and Martha perhaps and the other Mary, his own mother.

He knew their names. He had washed their feet. And now, while perhaps they varied in their understanding of what he was doing, Jesus carried out a very simple act. He shared bread and wine. Symbols of his body and his blood. A body and blood to be given for them, for us, through his death and resurrection.

The body of Christ given for you.

The blood of Christ given for you.

Given for you, by name.