Published by Richard Frost on 2 May 2022

In previous posts, I’ve considered the topics of importance and status, last weekend I was humbled by the response to a Bible study on Acts 6:1-7 which explores these themes. (You may like to read the passage alongside this post.)

The book of Acts tells the story of the early church in the period after Jesus’ resurrection. At that time, different individual church congregations were developing, notably among the Hebrews (from Israel/Palestine) and those from a Hellenistic (Greek) background. It’s been said that this passage describes the first recorded intra-group dispute in the Christian community – a tradition which has become a solid part of the church ever since….

The twelve apostles, that is the remaining eleven of Jesus’ chosen disciples plus Matthias, who replaced Judas Iscariot, were responding to complaints about the distribution of food to the poor, particularly to widows. The twelve ask the whole community of Christian believers to select seven people to be in charge of poor relief. These workers suited to heal the ethnic divide in the community are qualified because they are ‘known to be full of the Spirit and wisdom.’

Some translations of verse 2 refer to ‘waiting on tables’ which even today is seen as perhaps somewhat of a lesser occupation. Looking on to verse 4 we have the balance in that while some, the seven men who are about to be chosen, will ‘wait on tables’, serving food, the apostles will, verse 4, ‘serve the word’.

In the Greek, ‘wait’ and ‘serve’ come from the same word – diakaneo. The word means service.

A writer for the Theology of Work project puts it like this: ‘The Greek original, and some English translations, give the important sense that the work of serving those in need is on a par with the apostolic work of prayer and preaching.  The apostles serve the word, and the deacons (as the seven have come to be called) serve those in need. Their service is qualitatively the same, although the specific tasks and skills are different. Both are essential in the formation of God’s people and for the witness of God’s people in the world. The life of the community depends upon these forms of service, and Luke (the author of Acts) does not give us the sense that one is more powerful or more spiritual than the other.’

One of the seven was Stephen. Probably a Greek Jew by birth, Stephen was, verse 5, known to be ‘a man full of faith in the Holy Spirit’ and, looking on a little, verse 8, ‘full of God’s grace and power (who) did great wonders and miraculous signs among the people.’ He was also a great orator – but his eloquent and persuasive speaking drew opposition from Jews. Indeed, if you go on to read the next chapter, Stephen’s speech in his defence displayed a political nous that would be admired by today’s political leaders and 10 Downing Street.

Ultimately Stephen is dragged out of the city, like Jesus before him, and killed.

As the above writer continues, ‘Ironically, one of the table-servers, Stephen, turns out to be even more gifted as a preacher than most of the apostles. Yet despite his preaching gift, he was initially set aside for the task of distributing food to the poor. At that moment, at least, it was more important to God’s purposes for him to serve as a table-server than as a word-server.’

Stephen was chosen by the early church for a specific task. And it has been ever thus: the church discerning the will of God to choose people to do Christ’s work among the people of the world. 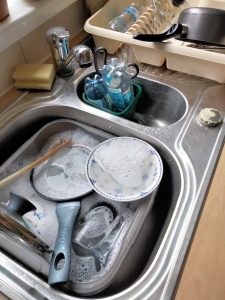 Yet, still, we can easily view certain tasks as being somebody else’s.

We are to be both word-servers and table-servers. Preaching the Gospel and doing the washing up. Those in church ministry can’t assume other people will serve them by doing what are seen as more menial tasks. For such tasks are as important as the tasks of a word-server.

Those called to ordained or lay ministry often have a very clear idea of being a word-server. That is perhaps what they consider to be their calling, their vocation.

So, a question from this passage is: where stands the table-server within us?

This post is an adapted version of a Bible study for those training for ordained and lay ministry with the South West Ministry Training Course (SWMTC) on 30 April 2022.