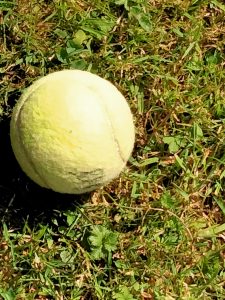 One of the unexpected aspects of having Covid and the fatigue that has come with it (I got more than I bargained for in my recent trip) has been watching far more of Wimbledon than usual. One thing that struck me has been the players with ‘the big serve’: the ones who can propel the ball at over 130 mph. Ace follows ace (interspersed with faults) but perhaps also a tendency of being ‘all serve and no volley.’

I have to admit that when it comes to watching tennis, I tend to switch off at the end of a set and then re-join when the next one is nearing its conclusion. I can’t really be doing with it until it’s closing in on the final result.

Both those insights – for player and spectator – reminded me how many aspects of life are to be about the whole thing, not just the bits which are our strengths or preferences.

Like me, I’m sure you have met people whose approach is like those with the big serve. Always seeking to impress, to make their mark, to score the ace. I’ve done it myself – with plenty of faults too. Then there are those who can’t be doing with things that aren’t achieving anything or aren’t as enjoyable. Ditto.

As I write, it’s one of the times of the year when many are being ordained to be a minister in the Church of England. After two or three years of intense, demanding training, people of all ages and backgrounds have reached that stage of putting on the dog collar and being called ‘Reverend’. Many will take up a post as a curate (a further three years of training in the sometimes harsh realities of parish life) and will go in to it believing they have to serve lots of aces.

So, let me tell you about James (that isn’t his real name). A week before he started as a curate, the resident vicar told the congregations a bit about him to help manage their expectations – for congregations have a lot of expectations of the clergy. They needed to know James wasn’t going to achieve match point straight away.

But a week later, James tried to do just that: fresh out of the locker room, ready to serve aces. First Sunday, as people gathered for the morning service, he opened the church door: “We can’t have it closed: we’ve got to welcome people…” Not on a cold summer’s day in an ancient church whose central heating hasn’t worked for months and there’s no money to repair it, you don’t.

“I’m not going to wear robes” was the next thing… “We need to have children’s work…” “We can have a weekly prayer meeting”… all to a congregation who liked their clergy to wear robes, which didn’t have any children or young families, who had never been used to praying together and didn’t know how to do it.

Eventually, after a few other tricky encounters, James put down his racket and turned out to be a very good curate indeed.

Whether we are ordained or not (and in many respects there is no difference), being people who serve is about playing the whole game. The bits we don’t like as well as the parts we do. The times when we want to impress and the occasions when we don’t need to. The moments when we want to give it all up and those when we wouldn’t be doing anything else.

In August, my new book Finding Stability in Times of Change will be published by a brand new, traditional publishing house, Endulini Publishing. If you would like to receive an advance copy and be able to write a review for Amazon and Good Reads, please click this link. Do also take a look at my new website at richardfrostauthor.com

Whether it’s in the speaking or in the writing, I have often encouraged people not to compare themselves with others. Regularly using two favourite quotes to emphasise the importance if not doing so: ‘It is Read more…

Last summer, Daisy the Vicarage Dog was very poorly. This normally lively (to put it mildly) now eight year-old Cocker Spaniel was barely able to move at times and had lost both her appetite and Read more…

Stability. It’s become the watch word of the current economic and political crisis. We’ve had the whole Brexit palaver. The pandemic. Russia’s invasion of Ukraine. Energy and cost of living crises. Inflation and strikes on Read more…