‘Henri said that for Vincent, and anyone trying to reach compassionate solidarity, it was also “like breaking through an iron wall. This was excruciatingly difficult, but also exhilaratingly beautiful when one succeeded.”’

My companion on retreat at Sheldon this week has been Carol Barry’s beautiful book Learning from Henri Nouwen & Vincent van Gogh (IVP 2019). In it, she paints portraits of the compassionate life illustrating them with words and pictures from two compassionate, faithful people.

Going on retreat is something I approach with expectation. Expectation that God will speak in an unexpected way. It’s very easy, of course, to approach such times with an attitude that says ‘It’s your turn now, God. I’m putting aside three days and I expect to hear from you.’ Almost as if one expects God to abide by our availability rather than us being open to what may be said at any time and in any place. It’s not that God doesn’t speak, it’s also whether or not we chose to listen.

So, the first 24 hours are usually spent reminding myself of the words of the 17th Century monk, Brother Lawrence: ‘One does not become holy all at once.’

Invariably, as that initial settling time settles, God does indeed speak. And I chose to listen as God spoke in an unexpected way.

I was staying in one of the self-catering rooms. This time, it’s the one they call ‘The Perch’. I wondered if that was symbolic perhaps. A place to stop before taking the next flight…

But it’s the iron wall, as Nouwen called it, that becomes more significant. And not just in relation to compassion for other people, as that author indicated, for this former ‘care professional’ has difficulty with the rawness of true compassionate solidarity.

It is the iron wall. It’s one that’s been constructed in recent months. A wall that needs to be broken through. Or to change the metaphor slightly, a wall which needs to be dismantled brick by brick. 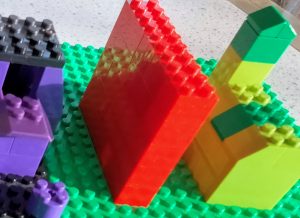 So this sixty-something was found to be playing with Lego as a way of working things through.

All of us build walls. Whether it’s building them between ourselves and colleagues at work or as ways of obstructing changes and developments. Or at church, where the ancient walls hide the invisible ones between those who inhabit it. Maybe you have built walls too.

Breaking through such walls is, as Nouwen described, ‘excruciatingly difficult, but also exhilaratingly beautiful when one succeeded.’

Dismantling walls means we can be released. Released to achieve compassionate solidarity with others. Released to move to the next thing God wants us to do. Released, even, to take the next flight.

It’s reminiscent of the words from Isaiah quoted in the Gospels in relation to John the Baptist:

3 A voice cries out:
‘In the wilderness prepare the way of the Lord,
make straight in the desert a highway for our God.
4 Every valley shall be lifted up,
and every mountain and hill be made low;
the uneven ground shall become level,
and the rough places a plain.
5Then the glory of the Lord shall be revealed,
and all people shall see it together,
for the mouth of the Lord has spoken.’  (Isaiah 40:3-5 quoted in Luke 3:4-6)

For God’s work to continue, we need to make straight the paths, to level the uneven ground. To dismantle, to break through the walls which get in the way.

Then the glory of the Lord shall be revealed.